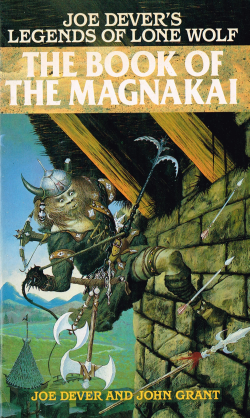 Thog the Mighty, a not terribly bright barbarian hero, is the creation of John Grant (Paul Barnett) in his "Lone Wolf" fantasy novels loosely based on Joe Dever's gamebooks. Thog first appeared in The Claws of Helgedad (1991), and attained front-cover stardom in The Book of the Magnakai (1992) – shown at the left. This is the only authentic likeness of Thog. There's a larger version here. But what, you ask, does Thog look like in his space-armour?

This regular department of the sf newsletter Ansible enshrines gems of "differently good" prose from (mainly) science fiction and fantasy. It is to be assumed that the chosen selections are stuff which brutish Thog really likes.

• When did this hideous tradition begin?

When David Langford edited the daily newsletter of the 1993 UK Easter SF Convention (Helicon) with Paul Barnett's assistance, Thog somehow became an in-joky presence: here's an account of the whole newsletter experience. At the 1994 Eastercon (Sou'Wester) – where Thog the Mighty was actually on the guest list – the same team co-edited the newsletter. To enliven routine reports of programme changes, the editors had researched numerous quotations which appeared in most issues as Thog's Masterclass – indeed a whole late issue of the newsletter was devoted to surplus Thog material. The department first appeared in Ansible in August 1994.

• But surely the idea must be much older?

Oh yes. Ansible 5 (December 1979) ended with Great Moments of SF Prose. Long before that, sf fan George Charters used to excerpt the worst excesses of Badger Books hackwork in his fanzine The Scarr (1963-1966). Brian Aldiss's and Harry Harrison's critical magazine SF Horizons (1964-1965) had a "Cabinet of Curiosities" department which provided one of Thog's favourite scenes of sf housekeeping: "He swept the antechamber with the eyes of a trapped animal." (Poul Anderson, "Among Thieves", 1957). And way back in 1930, D.B. Wyndham Lewis and Charles Lee made a Thoggish selection of poetry in The Stuffed Owl: An Anthology of Bad Verse.

• What was Badger Books?

• Where, oh where, can I read more Thog's Masterclass selections?

Try the links in the right-hand panel. Or ...